What Would Florence Do?

Mercy Street has no shortage of nineteenth century medical trivia. Dr. Foster repeatedly invokes his stellar medical education, which includes not only study in Philadelphia, America’s medical Mecca of that time, but also a grand tour abroad where he learned all kinds of fancy techniques from some of the great medical minds of the era. Similarly, we have been introduced to Anne Hastings, the alleged Crimean War nurse, her character no doubt causing many to brush up on their nineteenth century European history.

The show is overtly trying to demonstrate that the nineteenth century was a period of transatlantic medical knowledge exchange and that many Civil War doctors were smart and worldly and not just a group of bloodthirsty stooges. It is in this context that the Crimean War is exceptionally important to understanding patient care during the American Civil War. It is largely out of the Crimea that the notion of modern nursing came to the forefront of Anglo-American minds.

Lady with the Lamp, Henrietta Rae’s 1891 imagining of Florence Nightingale’s work in the Crimea

This was, in part, a result of the popularity of the Victorian icon Florence Nightingale and her legacy of sanitary hospital reform. Nightingale proved the inspiration for many American social reformers to volunteer their services during the Civil War.[1] Indeed, the Crimean War’s legacy to modern military medicine is one of philanthropy and private initiative overcoming government negligence, a theme that is already apparent in the show.

A bit of background is important here. When the British army arrived in the Crimea in 1854, it did so unprepared for high casualties or for extended deployment through the winter. After a number of battles and a season of campaigning in the fall, the British and French armies laid siege to the Russian port city of Sebastopol. The extended campaign, combined with the lack of proper provisions, shelter, and uniforms for winter action, led to thousands of wounded and sick soldiers overwhelming regimental hospitals. As a result, the Army began evacuating men from the front across the Black Sea to Turkey. These men were treated in abominable conditions at Scutari until Nightingale and her band of sisters arrived to clean up the military hospital. 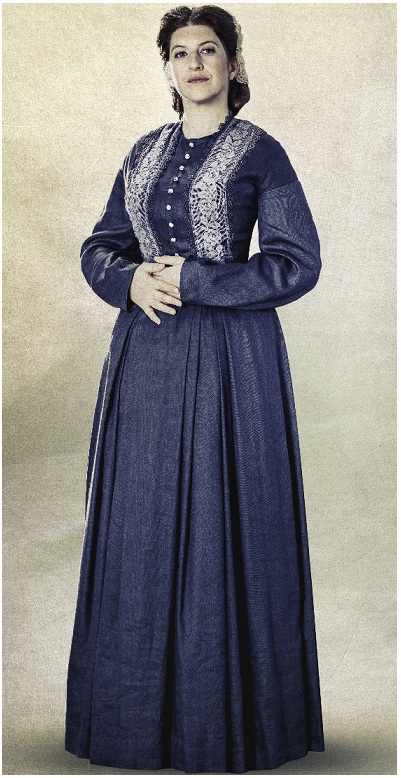 In Mercy Street, we learn about Florence (if I may) from the character of Anne Hastings who, armed with condescension and plaster of Paris, is nursing know-it-all who seems to exists merely to tell Mary Phinney what she doesn’t know about her job. But there is a serious inconsistency with Anne Hastings’s background and character development based on what we know of the history of the Crimean War.

In the first episode, when we were introduced to the Mansion House Hospital, the place is a hot mess. Men are unwashed, still in their uniforms and lying on dirty linen. They are crowded and cramped together in every area of the building, with no ventilation, or even, decent quality food or water. Mansion House is a little slice of Scutari in Alexandria: it is a place ripe for a selfless social do-gooder to come and reverse the tide of misery that is this sad hotel. If ever there was a hospital in need of a Nightingale nurse, it is this one.

Yet, Anne Hastings has been at Mansion House for a while and seems to be more interested in the affections of Dr. Hale and showing off her skills with the plaster bucket than doing anything about the sorry state of the place. If she is a Nightingale nurse, then she missed the biggest medical lesson of that war: sanitation. Nightingale, “saw a clear relationship between the diseases killing her patients and the filth in which they lay, the air they breathed, the water they drank, and the food they ate.”[2] Nightingale nurses cleaned men’s bodies, boiled their vermin infested uniforms, gave them clean sheets, prepared decent food, and ascribed to the belief that ventilation made for hygienic wards. They were fixers.

Hastings seems to be completely unaware of the mess around her. Sunday’s episode even went so far as to have her indignantly bark at Samuel Diggs when he was trying to open a window in order to ventilate the hospital, which is exactly what Florence did at Scutari. Florence (if I may) would be so disappointed (in so many ways) that all that excellent training and experience at saving men’s lives has gone for naught.

Dr. Isherwood is a graduate of Gettysburg College, Dartmouth College, and the University of Glasgow, the latter where he did his Ph.D. He specializes in modern history with a focus on war and memory studies. His articles and book reviews have appeared in First World War Studies, War, Literature and the Arts, The Journal of Military History, and War in History. Currently, Isherwood is writing a book, Remembering the Great War: Writing and Publishing the Experiences of WWI, for I.B. Tauris. Dr. Isherwood teaches at Gettysburg College where he is the Assistant Director of the Civil War Institute. He is the co-lead of the digital history project jackpeirs.org and maintains a teaching blog, Great War Writing.