Home » Discover » Museum Publications » Surgeon’s Call » “They Did Not Seem to Respect It Much”: Insignia and Medical Evacuation

“They Did Not Seem to Respect It Much”: Insignia and Medical Evacuation

The Civil War created a massive humanitarian crisis by the sheer scale of wounding and death. Mass casualty events were distressingly common throughout the conflict. These previously unimaginable catastrophes required adaptation both on the ground and in military medical administration to treat the wounded. Among the most important of these challenges was removing the wounded in a timely and safe manner from active battlegrounds. Both Confederate and Union medical professionals developed a myriad of evacuation systems. Dr. Jonathan Letterman, Medical Director for the Army of the Potomac, was the most successful in systematizing the approach to medical evacuation, but his system was not universal, even within his own command. Something so simple as naming the system in use was a source of disagreement: Confederate military personnel vacillated between the terms “infirmary corps” and “ambulance corps.” The confusing collection of sometimes competing medical evacuation systems and units North and South are evidenced by the disparate methods of identifying insignia that the stretcher bearers and ambulance drivers wore on the battlefield. These mixed messages sent by a lack of systematized insignia contributed to the high casualty rate among stretcher bearers. The best documented insignia type among Union stretcher bearers and ambulance drivers was the green stripe and chevron instituted by Dr. Letterman. In his Special Order No. 147 creating the Ambulance Corps, Letterman detailed precisely what the enlisted man should wear:

Two years later, using Letterman’s system as a guide, General George Thomas ordered his Army of the Cumberland to wear green bands around their caps and arms.[ii] Photographic evidence bears out the use of the green stripe and chevron by soldiers of the ambulance corps. In the collection of the National Museum of Civil War Medicine is a remarkably rare example of this uniform in an original portrait of an unidentified Ambulance Corps soldier. A similar portrait of Private Bruce Shipman of the 76th New York Infantry is in the U.S. Army Heritage and Education Center collection. In two separate photographs by Timothy O’Sullivan in the collection of the Library of Congress, some of the Ambulance Corps men of the Engineer Corps are also wearing the stripe. By ordering the use of green insignia, Letterman was likely tapping into an existing method of identification. In May 1862, fully three months before Letterman’s Special Orders No. 147, The Chicago Daily Tribune reported that musicians were to join “the ambulance corps,” and that “They are designated by a green badge.” [iii] Green was the color of medical professionals in the Union Army, where both surgeons of all ranks and hospital stewards wore green insignia per regulations that pre-dated the Civil War. 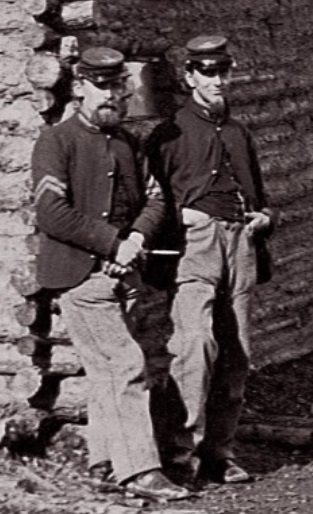 Unfortunately for Letterman’s system, green was not the only traditional color of medical professionals in the military. At the start of the war, the regulations of the United States Army dictated that ambulance depots be designated with “a red flag [which] marks its place, or the way to it, to the conductors of the ambulances and to the wounded who can walk.”[iv] This regulation was lifted verbatim by the Confederacy in its Regulations for the Army of the Confederate States[v] and often repeated in orders given by Confederate commanders throughout the war. Figure 5A and 5B: Details from “Falmouth, Va. Men and wagons of the Engineer Corps ambulance train,” Timothy H. O’Sullivan. Courtesy of the Library of Congress

Red is a bright color that draws attention. It made sense, then, that some would adopt red as the color of the stretcher bearers and ambulance drivers, much in the same way the Red Cross does today. In December 1862 orders to the XVIII Corps of the Army of the James it was dictated that “the uniform or distinctive badge of [ambulance men of] this corps shall be, for private and noncommissioned officers, a broad red band around the cap with a knot upon the right side, and a red band, one inch wide, above the elbow of each arm.”[vi] Less formal was the insignia remembered by Devalan S. Miller, a drummer boy in the 35th New York Infantry: “[The surgeon] proceeded to tear up some red flannel in small strips which he tied around our right arms, explaining that this was a badge the enemy would respect when we were caring for the wounded.”[vii] Figure 5A and 5B: Details from “Falmouth, Va. Men and wagons of the Engineer Corps ambulance train,” Timothy H. O’Sullivan. Courtesy of the Library of Congress

Red also appears to have been the color of choice for the Confederate ambulance men. English observer Lieutenant Colonel James Fremantle wrote that on the march to Gettysburg “in the rear of each regiment were from twenty to thirty Negro slaves, and a certain number of unarmed men carrying stretchers and wearing in their hats the red badges of the “ambulance corps.”[viii] The volunteer Richmond Committee for Our Wounded, sometimes styled the Richmond Ambulance Corps, wore hat and arm bands of pink (or possibly red faded to pink over the years), two of which survive in the collection of the American Civil War Museum.[ix] Confederate surgeon John J. Chisholm wrote in 1862 that “the members of this corps are designated by wearing around their caps a red band with ambulance corps printed in conspicuous white letters.”[x] In both the collections of the American Civil War Museum and the National Museum of Civil War Medicine are fraying examples of these badges.[xi] The Union army eventually veered away from red as a color of medical care. This was due in part to the fact that red flags, especially in conditions without breeze or wind, were difficult to distinguish from regimental flags. These could prove to be a target for enemy artillery that mistakenly believed the hospitals and ambulance depots to be enemy combatant positions. Similarly, red arm and hat bands were very similar to those worn by the artillery of both Union and Confederate forces and may have brought similarly unwarranted enemy fire. Figure 7: Detail of Union ambulance corps soldiers from “The Rebel Dodge to Cover the Retreat into Virginia. Flag of Truce to Look After the Wounded,” Alfred R. Waud, September 1862. Courtesy of the Library of Congress

In addition to red and green, stretcher bearers sometimes wore white. Just as the green and red insignia were extensions of military medical traditions, so too was white. White flags had long been (and continue to be) the symbol of neutrality. Alfred R. Waud illustrated the meeting of Confederate and Union ambulance corps soldiers in the wake of Antietam and clearly displayed the white armbands of the North, and cap badges of the South. Figure 8: Detail of Confederate ambulance corps soldiers from “The Rebel Dodge to Cover the Retreat into Virginia. Flag of Truce to Look After the Wounded,” Alfred R. Waud, September 1862. Courtesy of the Library of Congress

General Grant endorsed white insignia for the Department of the Tennessee on March 30, 1863, with General Orders No. 22, in which he ordered that “enlisted men detailed to the ambulances…will wear a white badge on the left arm above the elbow.”[xii] As late as the Battle of Cold Harbor in 1864, drummer boy George T. Ulmer assigned “to the stretcher corps” wore a “little white cloth…around our arms.”[xiii] A Confederate soldier fighting in Arkansas wrote home “The ‘Hospital Badge’ in a fight is a white rag tied around the arm. Our Infirmary Corps all wore these white rags and are secure from capture.”[xiv] At least as common as white, red, or green was a lack of any insignia. At times this was because soldiers who were not detailed to the Ambulance Corps were nonetheless required by an emergency to take up stretchers and assist their fallen comrades. Outer garments were not required to bear the insignia of the ambulance corps, and soldiers may have covered up their designation to keep warm, which may be the case in the below 1863 photograph of ambulance drivers at City Point, VA. Figure 10: Detail from “Wounded Escaping from the Burning Woods of the Wilderness,” Alfred R. Waud, May 5-7, 1864. Courtesy of the Library of Congress

Many photographs and illustrations show Ambulance Corps stretcher bearers and drivers wearing the uniform of the unit which they served absent any insignia designating them as medical non-combatants. Figure 11: Detail from “Unknown location. Zouave ambulance crew demonstrating removal of wounded soldiers from the field; another view.” Courtesy of the Library of Congress

There are many possible reasons that ambulance corpsmen would have ignored regulations regarding insignia. For some, the duty itself rendered them self-evidently non-combatant and so insignia did not seem necessary. Surgeon Francis M. Wafer of the 108th New York Infantry wrote “the stretcher bearers’ vocation is always known by the model of carrying the stretcher on the fields, that is carried open when empty looking when far away like a long & narrow white flag, if clean.” [xv] 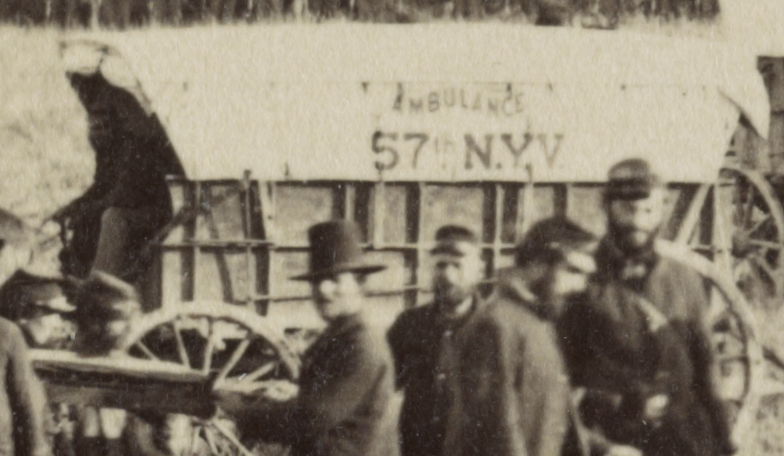 Soldiers assigned to the Ambulance Corps did not stop being soldiers in their original units. In his orders describing the use of Ambulance Corps badges for the 2nd Corps of the Army of Northern Virginia, Confederate surgeon Hunter Holmes Maguire required that the badges be returned by the attendants after the battle. A.P. Hill’s order of June 24, 1862, establishing an infirmary corps for his division made no specifications for any insignia.[xvi] The most famous image of a Civil War ambulance shows men in Zouave uniforms without any Ambulance Corps insignia.[xvii]

Figure 13: Detail from “Ambulance of the 6th Corps,” Matthew Brady. Courtesy of the National Archives and Records Administration

Many soldiers continued to wear the corps badges and uniforms of the regiments to which they belonged. Regimental or corps insignia was not restricted to uniforms alone. Numerous surviving photographs show ambulance wagons bearing the insignia of their unit. In the collection of the Gettysburg National Military Park is an ambulance flag emblazoned with the 2nd Corps, 1st Division emblem, an addition not authorized in Letterman’s orders.

By displaying the insignia of their original units, rather than those of the ambulance corps or Hospital Department, soldiers assigned after beginning their service as warriors visibly displayed their loyalty to the comrades they had served beside before bearing the wounded.

Altogether, this meant that Ambulance Corps stretcher bearers and drivers were probably difficult to distinguish. Whether wearing badges, arm bands, chevrons, or hat bands of green, red, or white, or no insignia at all, there was a great deal of confusion in designating ambulance corpsmen of the Union and Confederate armies. This certainly contributed to the high casualty rates of stretcher bearers.

Unable to distinguish Ambulance Corps soldiers from those bearing arms, some stretcher bearers must have been gunned down by mistake. In the collection of Don Troiani is a unique rectangular red patch bordered with green. This ambulance corps insignia is seen nowhere else in regulations or other surviving examples. Accompanying the small badge is a note by Andrew C. Brigham, who served as a musician in the 4th Massachusetts Infantry. He wrote “They did not seem to respect it much.”[xviii]

Kyle Dalton is the Membership and Development Coordinator at the NMCWM. H He has worked in museums across the nation for over fifteen years as an educator and public historian. A graduate of the Catholic University of America, Kyle received the Zeender Prize for his thesis “Active and Efficient” examining the role of veterans in the Ambulance Corps of the Civil War. In his spare time, Kyle writes and maintains the website BritishTars.com, where he explores the lives of common sailors in the eighteenth century through primary sources.