Figure 1: Print of the hospital complex taken from Mount Olivet Cemetery, ca. 1865-7, possibly the work of Frederick artist Jacob Byerly (1807-83). The frame hospital ward buildings are (l-r), M, F, N, K, and O (which is perpendicular to the rest). The stone Barracks buildings and frame kitchen can be seen behind the wards. The fence line is visible in front of the wards, running perpendicular to S. Market Street. View looking northeast.
Courtesy of Frederick C. Gaede

Some time ago I was given the photographic print presented here (Figure 1). Attached to it was a piece of paper identifying it as “United States General Hospital, Frederick City, Md  / View taken from Cemetery Hill.” (Figure 2) With my personal research and collecting interests in other areas, I filed it away, presuming one day I could investigate it further.

In March of 2016, I fortuitously met Chris Foard at the Baltimore Antique Arms Show while examining his display of Civil War nursing artifacts. I happened to mention this photograph, and he asked to see it. I took it to the show the following day and he expressed some knowledge of the subject matter. Thomas Frezza, staff member of the National Museum of Civil War Medicine in Frederick, MD, was also at the show, and recommended I take it to Terry Reimer, Director of Research at the museum, for further study. Indeed, Reimer was most helpful in providing more information on the hospital and its operations. Her book on hospital sites in and around Frederick after the battle of Antietam,[1] One Vast Hospital, provided much of the information quoted below.

Figure 2: The handwritten tag laid over the lower left hand corner of the print, identifying the “View taken from Cemetery Hill” as the General Hospital in Frederick.
Courtesy of Frederick C. Gaede

I also showed the print to a friend, Ross Kelbaugh, who has extensive knowledge of 19th century photography in Maryland. He identified it as an original albumen print, contact printed from the original wet plate negative. The current print of 11 ¼” by 6 7/8” was at some point mounted on a piece of poster board, with another ¼” border provided by the cardboard backing. A coating of what may be an eggshell varnish was brushed over the entire print, radiating from the upper left corner, appearing like rays from a sun just off the edge of the print. As noted above, a separate piece of paper, 5” by 1 11/16”, with a hand-written identification that the subject was a U.S. General Hospital in Frederick, was laid over the lower left hand corner of the image. The image and identifying note have suffered significant discoloration, inherent in the process used to produce albumen prints.[2] Additional fading from exposure to the sun is evident, and only under the piece of paper can a conception of the original image be formed from the protected area of the original print. The image presented here was created by scanning the original at 2400 dpi and then conducting electronic photo enhancement.

But what did the photograph reveal?

At the beginning of the Civil War, U.S. Army hospitals were usually organized by regiment, with a surgeon and staff assigned to a specific regiment. As casualties mounted in 1862 and overwhelmed the capacity of these hospitals, larger general hospitals were created that could serve patients from all regiments. For hygienic reasons, Frederick had been selected late in 1861 as a site for a regional hospital. The [General Nathaniel P.] Banks Division Hospital had taken over the small garrison Union Military Hospital at the Hessian Barracks, but was open only briefly in August 1861 before being re-opened in December 1861. With a general reorganization of Army hospital services, by June 1862 the complex was officially designated United States General Hospital #1. Assistant Surgeon Robert F. Weir started in charge of the Barracks Hospital in January 1862, and within a few months would face the maelstrom of casualties from the battles of South Mountain and Antietam. He would remain in charge of General Hospital #1 until February 1865.[3] 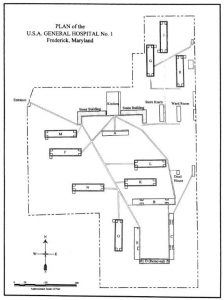 Figure 3: “Plan of the U.S.A. General Hospital No. 1, Frederick, Maryland,” from Reimer, One Vast Hospital.

Using Reimer’s book, which includes a sketch of the hospital with a similar directional orientation, it became clear the subject of the photograph was indeed U.S. General Hospital No. 1, taken from Mount Olivet Cemetery,[4] looking northeast to the hospital complex. The roof of a shed is visible in the lower left hand corner, and Market Street can be seen running diagonally up and left, just above the roof line. A comparison with the “Plan of General Hospital #1” [5] (Figure 3) confirms the orientation of the image, with Buildings N and O clearly visible. A fence parallel to the length of Building N defines the border of the hospital property, as well as a field with what appear to be corn shocks. The famous Hessian Barracks,[6] around which the complex was built, can be seen behind Building N, with the southern extension of the east building most clear. What may be the peaked roof of the kitchen, built between the two stone buildings of the Barracks, is barely visible. In the sketch of the barracks, made in 1861 while occupied by the Maryland Home Brigade[7] (Figure 4), the space between the buildings is basically vacant, but may be serving as a fenced livestock pen.

Considering that leaves still appear to be on trees in the image, and that the hospital buildings were removed shortly after the Civil War,[8] these details would indicate the image was likely taken sometime during a Fall season, between 1865 and  1867.[9] Possibly the photographer had heard the hospital would be taken down, and wanted to make a record of it before it was gone. 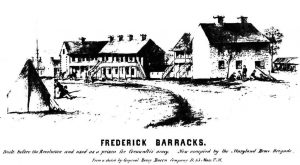 Figure 4: Identified by the artist, Corporal Henry Bacon, Co. D, 13th Massachusetts Volunteer Militia, as the “Frederick Barracks,” this ca. 1861 view of the Hessian Barracks does not show the kitchen between the two stone buildings needed by the hospital complex.
Courtesy Maryland Historical Trust, FHD-024

Who would have been a photographer with such local knowledge? There is nothing written on the print or current backer to suggest the name of the artist. However, Kelbaugh suggested it could have been the work of Jacob Byerly. Byerly (1807-1883)[10] was well known for having an ambrotype and photographic gallery in Frederick. He continues to be admired for his image of Confederate soldiers waiting in ranks in a street in Frederick, and also for his photograph of Barbara Fritchie. Byerly was well known for other scenes taken outdoors, and his traveling camera and dark room survive today in the Historical Society of Frederick County.[11]

Unfortunately there does not seem to be any corroborating evidence available to confirm that Byerly was indeed the artist that created this image. However, as an unknown original image of the hospital complex that was part of the Civil War story in Frederick, it adds to our knowledge of the physical site that served so many to recovery, or in their last days.

[4] The 32 acre cemetery was organized in 1852 and formally chartered two years later to provide downtown churches with room for internents beyond what their local cemeteries could accommodate.  See Steven R. Stotelmyer, The Bivouacs of the Dead (Baltimore: Toomey Press, 1992), Chapter 4, “Mount Olivet Cemetery.” See also Reimer, One Vast Hospital, 18-9.

[7] It was also referred to as the Frederick Barracks, as noted on this sketch by Corporal Henry Bacon, Co. D, 13th Massachusetts Volunteer Militia, ca. 1861, while they were occupied by the Maryland Home Brigade.

[8] Reimer, One Vast Hospital, 36, suggests the Frederick County Agricultural Society removed the frame buildings of the hospital around the end of 1867 and used the lumber to erect new facilities on East Patrick Street the following year.

[9] The western barracks building was demolished in 1871 to make room for the Maryland School for the Deaf, which had received legislative approval in 1867.