Since the spring of 2016, volunteers and staff from the National Museum of Civil War Medicine, led by volunteer and retired critical care pharmacist Greg Susla, have spent innumerable hours restoring and revitalizing the medicinal garden at the Pry House Field Hospital Museum. Originally a site of overgrown plants and weeds, it has been restored to its original location with raised beds. Initially, there were twelve plants and now, in the spring of 2019, the garden hosts 37 plants that are period appropriate and geographically accurate. The Pry Medicinal Garden will continue to evolve and will continue to represent the value of medicinal plants to treat illnesses both in the nineteenth century and today.

Overview of Medicinal Herbs in the Civil War

Plants have been utilized throughout history to treat various illnesses. In the years leading up to the Civil War, medicinal plants were the most common form of medication dispensed in the United States. Many herbal gardens found on rural homesteads and farms were full of plants that were known to have healing properties. The Pry family likely had such a garden on their property.

During the Civil War, plants were indispensable to ensuring the continued health of both armies, but especially so for Confederate forces. It became apparent early in the war that medical supplies would be scarce in the South when the Union blockade stifled trade to the Confederacy. The U.S. Navy labeled medical and surgical appliances as contraband.  Therefore, Surgeon Francis Porcher prepared a guide to resources in the south focusing on medicinal uses of plants native to the Confederacy. Porcher’s book, Resources of the Southern Fields and Forests, Medical, Economic and Agricultural, was published in 1863. Title page of Resources of the Southern Fields and Forests

Despite the shortages, the blockade benefited Southern soldiers as many were spared the harsh metals like mercury and lead used so frequently to treat illnesses by Union surgeons. These “medications” were more deadly than beneficial. While Union surgeons had ready access to quinine, which is derived from the bark of the cinchona tree, to effectively treat malaria, Confederate doctors improvised with boneset, dogwood berries, willow, poplar bark or the wahoo tree bark as substitutes. (Quinine is still used in anti-malarial drugs today). Harpers Weekly sketch of soldiers taking a quinine ration. The whiskey was meant to help with the bitterness.

Other medicinal substitutes used by Confederate surgeons included blackberry roots, charcoal, wild lettuce, peach leaf tea, rhubarb and a cordial made from persimmon and sugar to treat diarrhea and dysentery. These substitutes were undoubtedly less toxic than Union medical personnel’s affinity for mercury, used to treat everything from dysentery to headaches.

Mullien leaves and roots and wild cherry bark were used for cough and congestion. Opium and morphine were used extensively in the north to treat pain, but were scarce in the South. As a result, women grew poppies to make crude opium by piercing the ripe poppy heads and collecting the gum that oozed out. This attempt was not highly successful and Confederate surgeons relied on opium supplies stolen from the Union army.

Learn more in this interview with Greg Susla, the article’s author

The Union blockade also created food shortages in the Confederacy, most notably coffee. Union soldiers subsisted heavily on coffee and were known to drink gallons each day. Confederate soldiers were forced develop creative coffee substitutes, some of which included roasted acorns, sweet potatoes, peanuts and beets. Mature okra seeds that had been browned were considered the best coffee replacement, but okra seeds were rare. Yams or sweet potatoes that had been sliced browned and ground were thought to be the next best substitute. Regardless, many of these substitutes were highly unpleasant to drink.

Butter also became scarce in the South during the war. Sunflower seed oil was used to replace butter. A milk and cream substitute consisted of beating the white of an egg to froth.  Housewives were also forced to use rice, rice flour, cornmeal and rye flour as substitutes for flour, which during the war had become difficult to find.

The plants in this garden represent those that would have been used during the Civil War to relieve symptoms including pain, intestinal complaints, fever, colds, coughs and headaches and the most dangerous foe a soldier faced – diarrhea and dysentery.  Many are still used today, including ephedra in Sudafed and foxglove to regulate heartrate.

NOTE: Medicinal plants may contain compounds that may be harmful. You should always consult with your physician or pharmacist before you use these plants. 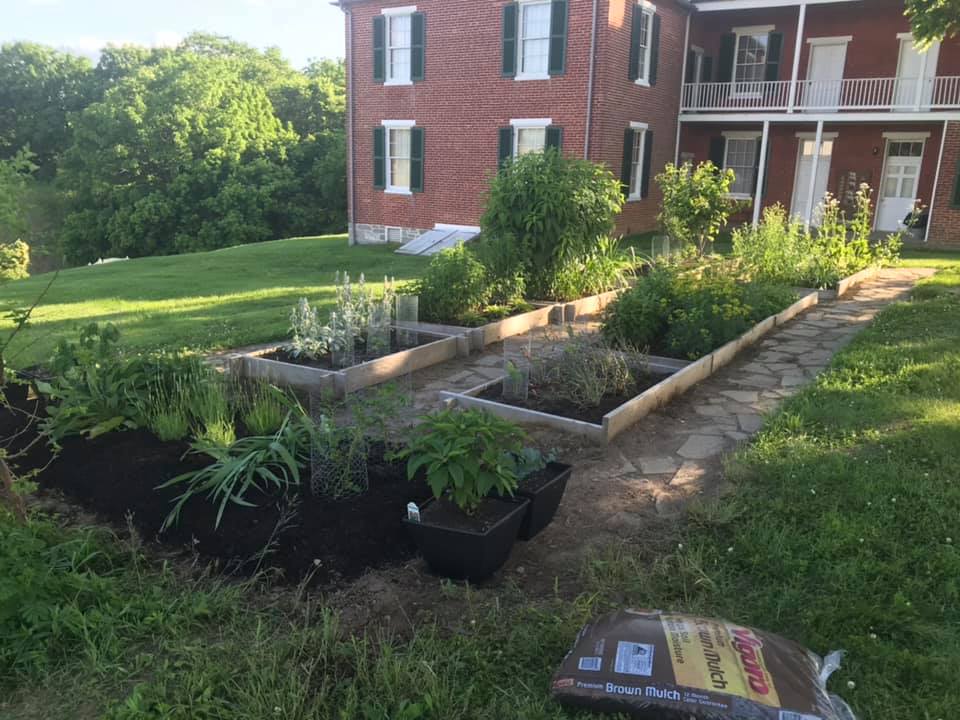 The Pry Garden at the start of the 2019 season A layout of medicinal herbs in the “right” (while looking from the house) beds of the Pry Garden and their uses. A layout of medicinal herbs in the “left” (while looking from the house) beds of the Pry Garden and their uses. A layout of medicinal herbs in the back bed of the Pry Garden and their uses. Greg standing in front of the garden in 2017 after a season of hard work.

Part Three – A closer look at the medicinal uses of Digitalis, aka Foxglove

Part Four – A closer look at the medicinal uses of Belladonna

Part Six – A closer look at the medicinal uses of Mint

Part Seven – A closer look at the medicinal uses of Senna