It is the time of the season to talk about the Pry House Medicinal Garden expansion that took place during the summer of 2018. To start, let’s remind everyone what the garden looked like when we first began the restoration in 2016. The garden was rather overgrown and in need of some love and attention. A look at the Pry garden before work was done.

We tore out the remnants of the old garden in April 2016 and planted Phase 1 of the garden in June 2016. Western red cedar raised bed boxes were installed and the first plants were planted. The initial plants included Echinacea, Gravel Root, Bugleweed, Calamus, English Thyme, Tobacco, Bearsfoot, Pulsatilla, Cramp Bark, English Hawthorne. These plants were selected to represent the plants that may have been grown in the mid-Atlantic area during the 1860s.

The plants thrived during the summer of 2016. We lost the Tobacco plants and a Pulsatilla plant to weather during the winter of 2016-2017, and we lost an Echinacea plant to animals so we took them out.

In the spring of 2017 we added Ephedra, Arnica, and St. Johns’ Wort, Belladonna and Foxglove and by the end of 2017, the garden was prospering quite nicely. These plants were added because they represent plants that are still used today to derive modern medicines. The use of Ephedra, for example, dates back to 2500 BC. It is the source of ephedra which is a natural analog of pseudoephedrine the active ingredient found in Sudafed®. Belladonna is the source of scopolamine, atropine and hyoscyamine. Scopolamine patches are used to prevent motion sickness, atropine is used to increase a slow heart rate and dilate the eyes during an eye examination and hyoscyamine is used to settle an upset stomach. The Foxglove species, Digitalis purpurea is the source of digoxin (Lanoxin®) a medication used to treat chronic heart failure. St. John’s Wort was added because it is still used today in its natural form to treat depression and anxiety. 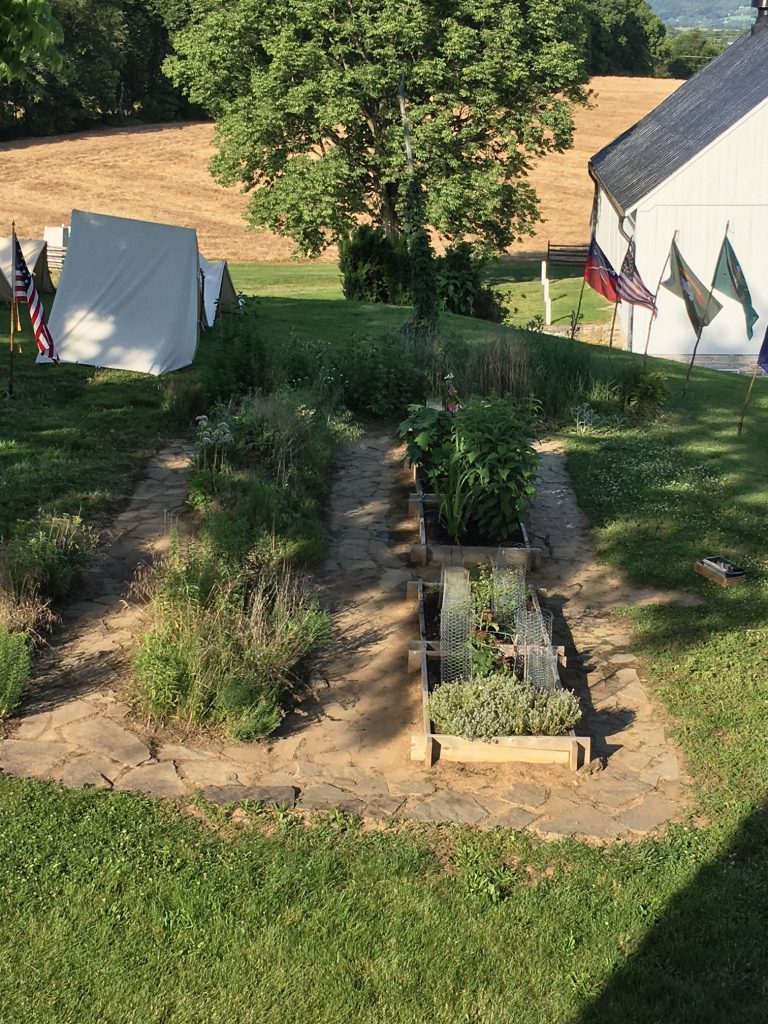 Pry Garden at the end of Phase 1

Unfortunately, we lost the Belladonna, Bears Foot, Arnica and Foxglove to the weather of 2017. But that did not deter us. We started the Phase 2 garden expansion in the spring of 2018 by removing the remaining garden beds.

We built and installed an additional 5 raised bed boxes.

Finally, in June we planted 10 new plants. The new plants include Oregano, Valerian, Wormwood, Gentian, Feverfew, Lemon Balm, Yarrow, Rue, Hyssop, and Vervain. We chose these plants because they have been commonly-planted in medicinal gardens across the ages. The Lamb’s Ear is still waiting to be transplanted and Autumn Crocus will be planted later in the year. Lamb’s Ear is a true Civil War plant because it has been used for centuries as a wound dressing on the battlefield.  Autumn Crocus is the source of colchicine which is still used today to treat the pain and inflammation of acute gout attacks. We will replant Belladonna and Foxglove next spring and look for another plant to replace the Arnica plant. Our plan is to have about 24-30 plants in the ground by the end on the 2019 season.

Now, with Phase 2 completed, we’re already looking towards the Phase 3 expansion to begin in the fall of 2018 and spring of 2019. Phase 3 will include adding plants to surround the border of the garden and a Hops trellis. Beer was routinely consumed during the Civil War as noted in many soldier’s diaries. The goal with the Hops trellis is to grow Maryland based Hops given the current popularity of Maryland-based microbreweries. Phase 2 at the Pry Garden

Over the past three seasons we’ve learned that this garden is no different than any other backyard garden, whether the garden was planted in 1863 or 2018. Some plants thrive while others succumb to weather, animals and other pests. The garden is not static but a work in continuous evolution. Plants will come and go over the coming years.

Initially, the purpose of the garden was to showcase only the plants that were the source of medicines during the 1860s. While that is still the primary mission of the garden, the mission has also evolved. Today, it has expanded to represent the value medicinal plants have provided over the past 5000 years and continue to provide today. With this in mind, we hope the evolution of the Pry House medicinal garden will keep bringing visitors back to the Pry House to learn about the plants and enjoy the garden, but also understand the important role medicinal plants still play today in treating illnesses.

Learn more in this interview with Greg Susla, the post’s author

This is the fifth in a series of posts about the Pry House Medicinal Garden. Click below to be directed to the others.