The Pry Family and the Battle of Antietam

In south central Pennsylvania a creek forms and winds its way into Washington County Maryland where it empties into the Potomac River south of Sharpsburg. The name – Antietam – is thought to be derived from an Algonquian phrase meaning “swift water.” Today Antietam Creek is known for the carnage and bloodshed that erupted near its shores on September 17, 1862, but before that, it was an ordinary stream winding its way through an ordinary town filled with ordinary families. One of these was the Pry family.

On an eastern rise of the creek near Keedysville, just off the Boonsboro-Sharpsburg Turnpike, Philip Pry and his brother Samuel built a two-story brick house in 1844. Three years later the brothers purchased a large grist mill north of the house at the junction of the Antietam and Little Antietam Creeks. Samuel became the sole owner of the mill and lived there with his wife and children. Around the same time, Philip and Elizabeth married and occupied the brick house on the hill, leading a quiet, peaceful life tending their farm and raising their children. The Prys were likely going about their daily chores when a young soldier knocked on their door on September 15th, 1862 (family lore suggests it was a young captain by the name of George Armstrong Custer). He informed them that their house and property were being taken over by the Union Army in preparation for a battle. Two days later, the Prys and every other family living in the area would witness the bloodiest day in American history and never be the same. Just who were the Prys and what happened to them after the Civil War?

Philip Pry’s paternal grandfather John DeBrie was of Huguenot descent and born in Germany. He immigrated to colonial America with his siblings and mother as an indentured servant when he was six years old. Unfortunately, John’s mother died on the voyage across the Atlantic. He served out his indenture in New York under a Mr. Rohrer, who also raised the young boy.

Indentured servitude was a common means for poor Europeans to immigrate to colonial America in the 18th century.  Indentured servants were individuals who signed a contract in which they agreed to work for a certain number of years in exchange for passage to America. Once their term of service ended, they were freed and sometimes given land.  Adults served less time than children and John was no exception – he was an indentured servant for a total of fifteen years.

On his twenty-first birthday, John was given a horse and moved to Pennsylvania. There he changed his name to either Bryen or Bryan and later to Bry. At some point he married and in 1760 had a son, Philip. Little is known about Philip Sr., but we do know he moved to Washington County, Maryland in 1810 and changed his name to Pry. On April 28, 1812, he purchased a farm containing 126 ¾ acres east of the Antietam Creek from Abraham Baker. Philip Sr. married twice. He had no children with his first wife Anna Elizabeth, but his second wife Susannah bore him three:  Samuel (1814 – 1901), Susannah (1815- 1901) and Philip, Jr. (October 22, 1817 – February 3, 1900).

Philip Sr. likely farmed his lands until his death on May 1, 1823. In his will, he left the farm to his wife until Philip Jr., who was six years old at the time, reached the age of twenty-one. Then, it was divided among Philip and Samuel. 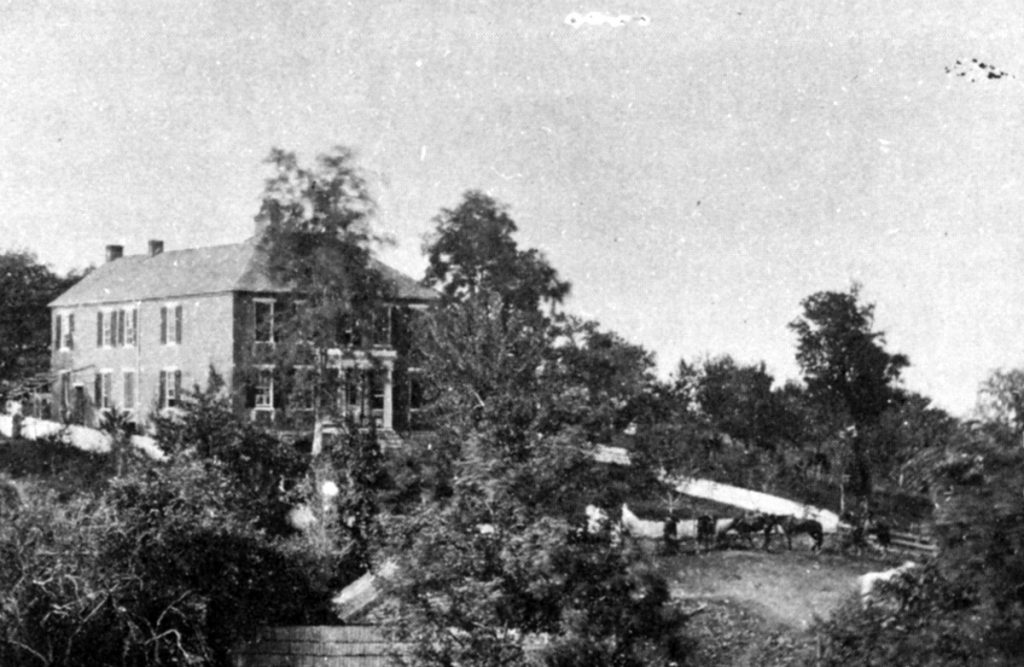 Photo of the Pry House taken September 1862 by Alexander Gardner. Courtesy of the Library of Congress.

Elizabeth Pry (née Cost) was born October 12, 1831 to Samuel and Barbara Cost. The Costs were members of the German Reformed Church and provided land for the Mount Vernon German Reformed Church in Keedysville. The structure was erected August 28, 1852 and became the center of social life in the community. Unfortunately, it would later turn into a place of untold suffering when it was converted into a field hospital during the Battle of Antietam.

Samuel Cost was the most successful country shoemaker in Washington County. He learned the trade from his father and was able to purchase large tracts of land, eventually amassing over 450 acres. Samuel married Barbara Keedy (sister of John J. and Samuel Keedy from whose name Keedysville is derived) on March 21, 1823. They had six children. Their daughters Mary Ann and Elizabeth Ellen married brothers, Samuel and Philip Pry respectively.

Following the Battle of Antietam, the Prys never recovered financially. The Union army occupation was devastating. The entire Second Corps camped on or near the property while General McClellan and his staff occupied the house. The army depleted the Pry’s food stores, slaughtered their livestock, burned their fences for fuel, used their hay and fodder and stole or damaged the family’s personal possessions. In addition, the Pry Barn housed between 400 and 700 injured soldiers from the Bloody Lane. Philip filed several claims for compensation from the government totaling over $9,000. He had to wait until November 27, 1865 for the first claim to be paid in the amount of $2,662.50. Two other claims were paid out seven years later in 1872, a full decade after the Battle of Antietam. In the end, the Prys received a total of $4,243.53. Unfortunately, the government deemed part of this to be overpayment and Philip Pry was forced to repay $1,209.38.

The financial burden finally proved too much. In 1873 the Prys decided to move south to Tennessee to start a new life. Friends and family in the community gathered and made a Memory Quilt as a parting gift. Memory quilts were common in 19th century communities and were given to commemorate a memorable event or, most often, as a going away gift. Blocks on the quilt were personalized by signatures or brief notes by those left behind, making the quilt a sentimental and practical gift (quilts also played a major role in Civil War hospitals improving the moral of sick and wounded soldiers). Quilt block with inscription: “Remember me when this you see though many miles apart we be your friend Susie Hoffman”

On December 13,1874, Philip and Elizabeth sold the farm to Daniel W. Wyand of Washington County for the sum of $14,172.50 containing 141 ½ acres.  The 1880 censes shows the Pry family living in Washington County in eastern Tennessee. There they lived until Elizabeth passed away on February 1, 1886 near Johnson City. Per her last wishes, her remains were returned to be buried next to her family in Maryland and interred at Fairview Cemetery in Keedysville. Philip passed away on February 3, 1900 and was buried alongside his wife.