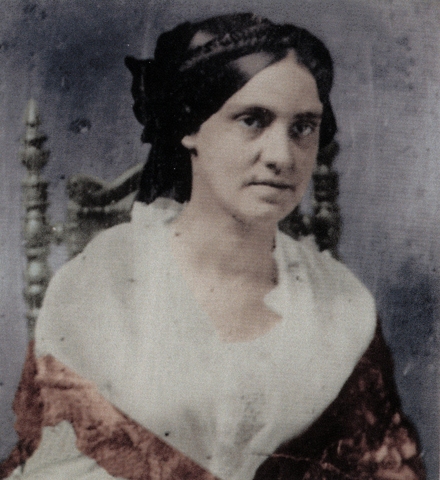 Phoebe Yates Levy Pember is one of the Confederacy’s most celebrated nurses. She was born to the wealthy Levy family in Charleston, South Carolina. Her husband, Thomas Pember, died from tuberculosis in the first year of the war. She joined the Confederate nursing campaign in December 1862 and served as chief matron of the Second Division of the Chimborazo Hospital on the outskirts of Richmond, the largest hospital in the Confederacy. In addition to her tireless commitment to patient care, perhaps she is most famous for waging a one-woman crusade against alcohol abuse at the Chimborazo Hospital. Pember was appalled by the abuse of the hospital’s limited alcohol supply by doctors, other hospital employees and even patients. As a result of this mismanagement of vital resources, by the end of the war, Pember insisted on monitoring the hospital’s alcohol supplies. While participation in the temperance movement was common for nineteenth-century middle and upper class women of the North and South, such involvement generally consisted of less extreme efforts than lobbying for command of a hospital’s entire alcohol supply. Pember’s vigilantism prompted repeated complaints from her male colleagues and even garnered interest from some of the most powerful men in the Confederate Medical Department, including Medical Director William Carrington. Chimborazo Hospital on the outskirts of Richmond, Virginia. Courtesy of the Library of Congress

He advanced towards the [whiskey] barrel, and so did I, only being in the inside, I interposed between him and the object of contention. The fierce temper blazed up in his face, and catching me roughly by the shoulder, he called me a name that a decent woman seldom hears and even a wicked one resents. But I had a little friend, which usually reposed quietly on the shelf, but had been removed to my pocket in the last twenty-four hours, more from a sense of protection than from any idea that it would be called into active service; so before he had time to push me one inch from my position, or to see what kind of ally was in my hand, that sharp click, a sound so significant and so different from any other, struck upon his ear, and sent him back amidst his friends, pale and shaken.

‘You had better leave,’ I said composedly (for I felt in my feminine soul that although I was near enough to pinch his nose, that I had missed him), ‘for if one bullet is lost, there are five more ready, and the room is too small for even a woman to miss six times.’

The men threatened to return, but never did.

Phoebe Yates Pember wholeheartedly tried, sometimes even at the peril of her personal safety, to reform alcohol abuse at Chimborazo. One might wonder, what would have happened if Pember ran the show at Mansion House?