Mending the Broken Faces of War

“Plastic Surgery:” Today the phrase may bring to mind thoughts of people voluntarily undergoing operations attempting to look eternally young or more attractive. But for wounded soldiers, beginning during the Civil War and continuing through today, plastic surgery has a far deeper resonance.

“Plastic” before the introduction of organic polymers, often referred to an object that could be shaped or sculpted – in this case, a patient’s skin and soft tissue. According to the Oxford English Dictionary, the term was first used in The Lancet in December of 1837. Army Medical Museum curator George Otis reported only 32 cases of ‘Plastic Operations’ in the first surgical volume of the Medical and Surgical History of the War of the Rebellion (MSHWR) in 1870. Of these, “twenty-nine were for deformities following gunshot injuries” while noting there were “nearly ten thousand in number” cases of gunshot injuries of the face during the war. (MSHWR Surg I, p. 379)

Private Joseph Harvey’s injury illustrates a typical case of a facial wound, albeit from a shell not a gunshot. Otis concisely wrote up the case on the back of Surgical Photograph 79: Private Joseph Harvey, C, 149th New York, was wounded at the battle of Chancellorsville, May 3, 1863, by a fragment of shell. The right eye was destroyed, the right superior maxilla was fractured, a fragment was chipped off the lower jaw, and the right cheek was frightfully lacerated. The prisoner fell into the hands of the enemy, and remained a prisoner eleven days. In the middle of June, 1863, he was admitted into Mansion House Hospital, at Alexandria. In August, portions of exfoliated bone were removed. A ferrotype, representing the appearance of the wound at this date, was forwarded to the Army Medical Museum. On May 7, 1865, Harvey was discharged from service on account of physical disability. He was subsequently employed as a night-watchman at the Commissary Hospital in Alexandria. The photograph was taken June 22, 1865. The loss of substance in the cheek was still unrepaired, and liquids and saliva escaped from it. There was slight deafness and partial facial paralysis on the right side. This soldier was pensioned, and his death, from cause not known, was reported December 9, 1868. An example of basic surgical care can be seen in Surgical Photograph 32, “Shell wound of the face.”  Pvt. William H. Nims, Co. D, 61st New York Volunteers, was wounded on June 17, 1864, at the Battle of Petersburg, Va. Surgeon Thomas Crosby removed bone splinters and stitched his wound together with no attempts at reconstruction. Nims survived, but “In 1867, Pension Examiner G.W. Avery, reported that this pensioner continued to suffer greatly, and that the very unpleasant deformity induced by his wound, made it impracticable for him to obtain employment. Thus his mutilation was a doubly cruel one.” (MSHWR Surg 1, p. 329-330)

In other cases, surgeons attempted to repair some of the damage suffered by the soldiers. Surgeon J.C. McKee of Lincoln Hospital in Washington, DC attempted one of the most difficult reconstructions as described here in MSHWR:

CASE.—Private Rowland W——, Co. E, 4th New York Heavy Artillery, aged 46 years, was wounded at Ream’s Station, Virginia, August 25th, 1864, by a fragment of shell, which destroyed and completely carried away the inferior maxillary bone and soft parts, commencing two inches anterior to the angle on the right side, carrying away the chin and all the soft parts down the neck, on a level with the hyoid bone, destroying the floor of the mouth completely, allowing the tongue to protrude and hang down on the neck; deglutition and articulation were impossible. Three of the right lower incisor teeth, with the corresponding alveoli loosely connected with the tissue, remained, and were allowed to stay in that position until the healing process took place, as they gave a partial support to the tongue and submaxillary gland, which was not injured. The wound extended across to the left side, carrying away all the teeth and jaw bone, except those previously mentioned, to a point as high up as the angle of the inferior maxillary on the left side. He was admitted to Lincoln Hospital, Washington, August 28th, 1864. His general health was bad from scurvy. The patient did well, and improved rapidly. On December 9th, he was furloughed for thirty days, and, at the expiration of his furlough, he was readmitted to hospital in good condition. On January 20th, 1865, an operation was performed to construct a floor for the mouth—no anaesthetic was used. 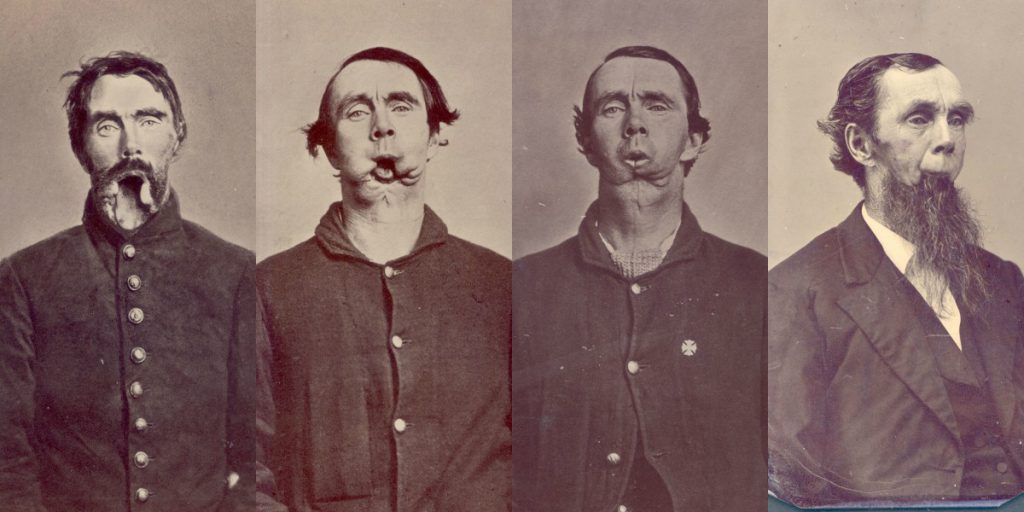 Private Roland Ward. Courtesy of the National Museum of Health and Medicine

In that operation, and a second one in April, flaps were constructed and stretched across where his lower jaw would have been.

On June 23d, the patient was discharged at his own request. A fistulous orifice, one-fourth of an inch in diameter, only remaining, in consequence of the constant secretion of saliva… He is able to articulate quite plainly, which he has hitherto been unable to do since the date of his injury. Until the completion of this operation the patient was compelled to assume a recumbent position to receive his nourishment, or even a swallow of water. He can now take his food and drink without any difficulty, in an erect posture. By the use of a rubber button, properly adjusted to the fistulous orifice, the secretion of saliva was prevented from making its exit externally. The appearance of the patient, both before and after operation, is shown by photographs Nos. 167, 168, 169, 170 and 186, Surgical Series, A. M. M. The photographs were printed from negatives prepared at Lincoln Hospital, under the direction of Surgeon J. Cooper McKee, U. S. A., who was the operator in this case. On November 8th, 1869, Ward forwarded a letter to the Surgeon General in reference to a pension. He wrote that he was obliged to live on milk diet. The letter, with photographs and a history of his case, was forwarded to the Pension Office. He is a pensioner.

Ward had a tintype photograph taken in 1876, twelve years after his injury. McKee sent it in to the medical museum.

Dr. Gurdon Buck of New York was one of the most active and successful practitioners of plastic surgery after the war. But as plastic surgeon Dr. Blair Rogers observed, “The plastic surgery techniques that Gurdon Buck used in every conceivable modification, however, were only the simple or complex techniques of rotation, transposition, and/or advancement flaps, i.e., flap techniques, to reconstruct serious facial defects. These techniques had been described 25 centuries earlier by Sushruta, the Indian (C. 1000 B.C.) and almost a millennium later, by Celsus, the Roman. Gurdon Buck was one of the few Civil War surgeons who knew anything about the proper and adequate use of advancement, rotational , or transposed flaps to cover large facial defects” (Rogers & Rhode, p. 270-271). Rogers also notes that now-common techniques such as Z-plasty and skin grafting were either rare or unknown. Buck published his cases in journals and a book, attempting to disseminate his achievements, but until World War I, American surgeons had very little need of such knowledge. One of Buck’s most famous cases is that of Carlton Burgan. In June of 1862, twenty-year old  Burgan (Co. B, Maryland’s Purnell Legion), was poisoned with mercury in the form of calomel, when he was diagnosed with pneumonia and treated with it. By October of 1862, a large portion of the tissue of his face, including his upper jaw and teeth and right eye were dead and removed by surgery. By December, Burgan was discharged from the Army and sent to New York where Buck and Thomas Gunning, a dentist began treating him, first by making three artificial mouth pieces. In 1863, he underwent regular operations to rebuild his face. By the next year, 1864, he was working in a ward of New York Hospital as an assistant nurse. Burgan continued to need an artificial palate plate and teeth to speak clearly and to eat. After the war, he returned to Maryland, married, and still has descendants in the Baltimore area who provided this picture of Burgan wearing a mask or pad over his injury.

In his Medical and Surgical History of the War of Rebellion chapter, Otis dismissed the utility of plastic, or reparative surgery, writing “But, as a general rule, the deformities following gunshot wounds of the face and suggesting some plastic procedure are either accompanied by such extensive loss of tissue or chronic diseases of the [bones], as to forbid any hopeful undertaking in the way of reparative surgery. From the pensioners at the Soldiers’ Home and the National Asylums for Disabled Volunteers, no instances of loss of tissue from gunshot wounds have been reported where autoplastic operations could be undertaken with reasonable anticipations of success. ” (p. 379-380)

It was not until the First World War that plastic surgery “could be undertaken with reasonable anticipations of success. ” Harold Gillies working with a specialized team in an English military hospital treated thousands of wounded soldiers. He also quite lately wrote the book on facial reconstruction techniques based on this experience. Like the Civil War era, many of these soldiers’ faces “before and after” operations were recorded in photographs and original drawings by notable artists-surgeons such as Henry Tonks. Many of these operations were spectacularly successful, with veterans afterwards enjoying fairly normal lives. Others less so.  Often such men still with broken faces would take on a job as night watchman, like Civil War counterpart Joseph Harvey, or in this later era as a movie projectionist—but all were working in the shadows.  Yet another generation of American plastic surgeons learned from Gillies and applied his methods not only to facially maimed military personnel, but also to civilians who suffered grievous injuries in automobile crashes or in fires. In time, this painstaking and painful surgery would become foundational to what is now popularly referred to as “plastic surgery.”

Alberti, Samuel. War, Art and Surgery: The Work of Henry Tonks and Julia Midgley. (London: The Royal College of Surgeons of England, 2014).

Otis, George. The Medical and Surgical History of the War of the Rebellion Volume II, Part 1 (aka Surgical 1) (Washington, DC: Government Printing Office, 1870).

Images Courtesy of the National Museum of Health and Medicine

Michael Rhode was chief archivist of the National Museum of Health and Medicine’s Otis Historical Archives. Rhode had been with the museum since 1986 and in charge of the archives from 1989-2011. In between the two periods he worked at the National Archives and Records Administration. He’s currently the archivist for the US Navy’s Bureau of Medicine & Surgery’s Office of Medical History. Rhode has authored numerous papers and articles, in addition to making many presentations on medical history. Exhibits he has curated include “American Angels of Mercy: Dr. Anita Newcomb McGee’s Pictorial Record of the Russo-Japanese War, 1904,” and “Battlefield Surgery 101: From the Civil War to Vietnam.” He co-authored the catalogs for both exhibits as well.

J.T.H. Connor is John Clinch Professor of Medical Humanities and History of Medicine, Faculty of Medicine, Memorial University of Newfoundland, St. John’s, Canada; he also holds an appointment in the Department of History.  Previously, he was Assistant Director (Research and Collections) at the National Museum of Health and Medicine (formerly the Army Medical Museum). He has published widely on science, technology, and medicine in North America, as well as aspects of medical museums.