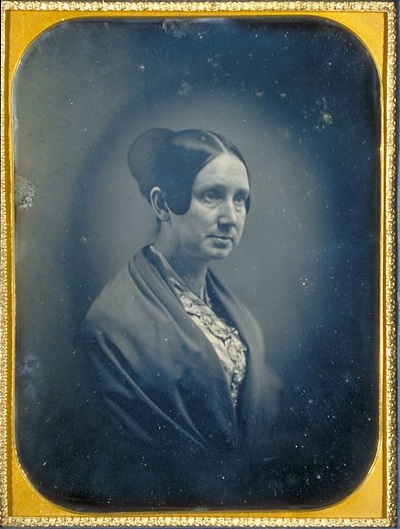 “These boys must be looking to for their recuperation, not the hem of your skirts. You come highly recommended but I had no idea you wore such a dress.”

PBS’ new original series, Mercy Street, began with yelling—Dorothea Dix, Superintendent of Army Nurses berating someone behind the closed door to her office while her next victim appointment waits nervously outside. However, when Dix emerges, the Dragon Lady is all smiles, mentoring and encouraging Mary Phinney before sending her across the Potomac to Mansion House Hospital. Dix doesn’t reappear until the season finale; however her influence can be felt throughout the season. The Union hospital personnel regularly bemoan the interference of “Dragon Dix.”

When the Civil War broke out in 1861, Dix sprang into action. She made her way to Washington, where an influx of wounded soldiers with gruesome injuries arrived daily. Unlike today, there was no organized system of battlefield-to-bedside care in place to treat the wounded. Dix wanted to help fix this. She introduced a radical idea: permitting women to enter the predominately-male profession of nursing, thereby increasing the number of available nurses while the men were off fighting. Dix convinced the Army to create the nation’s first female nursing corps … under her control of course.

As Superintendent of Army Nurses, Dix laid out guidelines for the recruitment of female Union nurses. She chose candidates between the ages of 35 and 50 and insisted they be “plain looking” to avoid tempting the male soldiers and doctors. Dix forbade her nurses from wearing jewelry, makeup, curls, bows, or hoop-skirts.  Army doctors and nurses alike bristled at Dix’s demands. They began referring to her as “Dragon Dix” or the “Dictator in a Petticoat.”

As the nicknames implied, Dix expected a lot from her nurses. However, she also fought for them. In the Army, male nurses were paid $20.50 a month, however female nurses received no pay and had to cover their own expenses. Dix convinced the government to supply the nurses with food, transportation, housing, and ultimately to pay them forty cents a day for their work.

Dix resigned her commission in 1865 and returned to the work she had been doing before the Civil War: advocating for the mentally ill. Before the Civil War, Dix had been trying to improve care for the mentally ill in America. Inspired by the British mental health system, Dix began working to improve mental health facilities first on a state by state basis, then through at national reform bill. After the war, she picked up where she left off.

Dix’s work on behalf of the mentally ill would take her all over the country and skyrocket her to international acclaim. However, Dix never forgot her war work and was extremely proud of her contribution to the Union. In 1867, upon receiving an American flag in recognition of her importance to the war effort, Dix exclaimed, “no possession will be so prized while I am alive to love and serve my country.”

Lesson Plan: “No Bows, No Curls, No Jewelry”

Stark Harbor is a senior at Shepard College and an intern at the National Museum of Civil War Medicine.